http://charlotte.craigslist.org/pet/5090733337.html
Someone please save these rats! They are free and owners don't care if they are feeders or pets. Really want them to go to good home as pets! Hope someone will save them.

Hey guys! I don't know if you remember me but I used to be in this community back in 2009-2010. In 2011, I lost my beloved Pwny, a black-hooded fancy rat and swore off rats because it just hurt losing my friend. Sold/gave away all my rat things and carried on.

I've been feeling the need for a furry critter so back in March, to get my mind off some personal issues, I adopted a few: Riza a cream red-eye hooded and Izumi- a haired double-rex dumbo. Izumi I received from a breeder who was getting out of breeding. Well, the breeder brought Izumi's half-tame father, a double-rex hairless, who snuggled in my hoodie with me when I agreed just to "look at him", and well... He came home too.

Thankfully, I have a large Critter Nation and just blocked off the middle so the two girls couldn't get in with Bucc.

So that puts me at three rats.

Now I know rats are social creatures. I considered getting Bucc neutered (I also work as a Vet Tech and the Doc I work for said he would neuter him), but we got busy and I kept pushing it back and back. So I figured "Hey, won't I just not neuter him and get him a friend around his age?"

So I contacted another breeder and got a GORGEOUS gray and white spotted dumbo male, about six months, the same age as Bucc. Started doing slow introductions. I guess Arrow smelled too much like other rats at the first neutral meeting in my bathtub because Bucc savagely attacked him! I'm not talking little scuffles, no. Arrow suffered a few lacerations. =/

Waited a few days, bathed both of them and tried brushing vanilla extract on both of them. That seemed to work very well! They got along, cleaned each other. But then Bucc lashed into him again.

Soooo... I had Bucc neutered today. He's doing well post op and he's going to stay in his post-op cage for a while (any advice with post op care is appreciated!!! Never had a neutered rat before!)

So, here we go with my main questions now that that is out of the way:
My main goal is when Arrow gets a bit bigger, to have him neutered as well and have the two girls and the two boys to all live together.
1. Is this a reasonable goal? Or will there still be battles from the males over the females?
2. Should I go ahead and put Bucc in with the females, or reintroduce him to Arrow?
3. How long do I need to wait after having him neutered to make sure he's 100% sterile?

Any advice is welcome. I'm still rather novice at rat keeping and my last three girls all lived together in harmony. Boys on the other hand seem to be a lot more difficult.

It's been almost a week since I adopted my rats, and I promised that I would post some pictures of them.  They've been settling in nicely.  Irene and Mary are very outgoing, and will tolerate my picking them up, especially if I offer them a Cheerio when I do.  Violet has actually been rather shy if the cage door is open, although she likes to run up to the bars whenever I talk, or move, or breathe loudly, etc.  For the first few days she refused to take treats from my hand, and would wait until I had set it down and had removed my hand before grabbing them.  Now she's willing to take them directly from my fingers, though she acts as if it's a huge imposition - she looks, and looks, and then very gently reaches out and pulls the snack away from me.
( Collapse )

Hi! I haven't posted in a very long time, but I used to have three rattie boys: Basil (in my icon), Doyle, and Moriarty. Sadly the three of them passed away several years ago, and I haven't had any since then. Every so often I would stop by the MSPCA and see what rats they had looking for homes, but I never found any that caught my eye until this Saturday. I ended up adopting three girls today, and in keeping with my theme I've decided to name them Irene, Violet, and Mary. They're settling in now and exploring their cage, but I'll post some pictures and stories of them in a day or two, once they've settled in.

I did have a quick question that I wanted to run by people. I have a Super pet small animal cage with plastic shelves.  When I had my boys, I would secure their fleece covers to the shelves using 1 inch binder clips, but these could be a pain to put back without removing the shelves entirely.  How to you guys keep your shelf liners from sliding around?  Would velcro on the shelves be an alternative?  Also, if I wanted to use wooden bird ladders as ramps to get from one level to another, is there a way to secure them without having to punch holes in the shelves?

birthday present by natsaka on deviantART

One years ago, I bought my first standard rat at a petshop.
He cured the depression I had when I lost my hamster.

Hey all. My old rat, Charlie, passed away recently. Left behind is Benzene, an older rat who is very lonely and depressed since his best friend died. Unfortunately I'm not able to get a new rat since in a few months I will be moving in with someone who is allergic (who would be willing to put up with the symptoms for one, but not two). I'm wondering what you guys would recommend - I've been spending as much time with him as possible, cuddling with him and rushing to see him as soon as I get home, but he is no longer enthused about life or excited to see me when I come home. I would like to get him a "playdate" - does that make sense or is it a bad idea? Do you guys have any other ideas? I would love to get a new rat, but it is unfortunately not a realistic option. I live in north Florida - Gainesville.

My beautiful 2 year-old girl James has been a bit wheezy for the last day or so. I'm guessing it's a myco flare up. I can't see any other symptoms other than the wheezing. Do I need to take her to the vet, or does this sort of thing fix itself as long as I make sure she's cared for over the next few days?

And because text-only posts suck, here's my little girl. This was last summer soon after she'd had surgery (she was a little trooper). Her fur's all grown back now :) After several months of recurring abscesses and surgeries (for lack of a better word) the vet's finally decided that IT'S PROBABLY CANCER. They could do another surgery and buy her a few weeks, but we've spent our entire savings on this precious (and I DO mean precious!!!) little creature. And we'd spend more if we knew it would help. She's not even two yet, and she's probably the best rat I've ever owned (definitely the cutest and the sweetest) so if there's ANYTHING I can do I'd like to try. 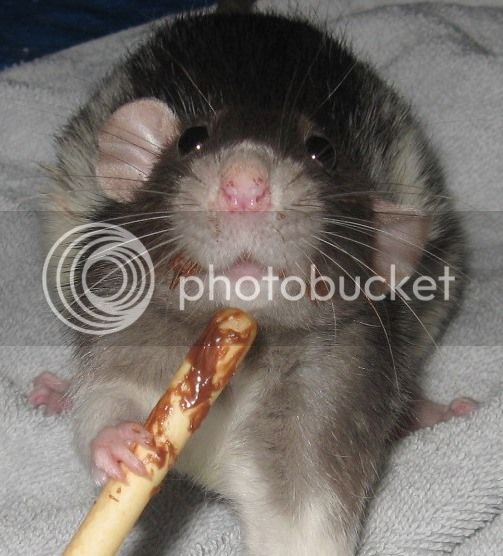 Here she is trying Nutella Spread for the 1st time ever.

She REALLY loves Nutella spread. I know it's not a healthy snack, but I mean, if she's got cancer does it really matter?

Here's a link to a webpage about that particular type of cancer (I think.)
http://ratguide.com/health/neoplasia/squamous_cell_carcinoma.php

Even though I like knowing that you think she's cute, I'd much prefer advice or suggestions on how to save this sweet baby girl!!! If anybody has any experience with repeated open wounds / abscesses (with or without a tumor present) I'd really appreciate your advice!!! I hate thinking that there's nothing I can do, but we've tried everything and nothing has worked!! I'm at a loss, and I fear soon I'll lose my favorite rat too. :(

Charlie, Delilah and Althea wishing you a Happy Valentine's Day,